Day 2 - Please Be Seated For Departure

The ship is departing from the dock, rocking precariously as it stabilises itself upon the water. Basically the learning is underway!… and I’m pretty reassured by the resources available. I expressed desire to learn Malayalam a few months ago, and quickly abandoned the idea once it became apparent that the Malayalam language learners aren’t treated to the same plentiful resources available to those learning French or Portuguese for example. Michael Thomas is yet to hit Indian shores. That said, I’ve had the following two books arrive today: 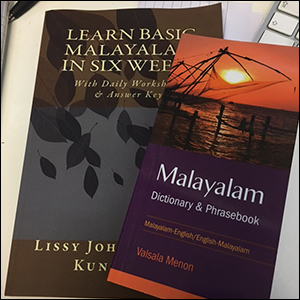 Both of which were ordered at and promptly delivered by Amazon UK. Result. This, coupled with Anki, and the Mango languages course gives me a good few resources to work with for the moment. I’ll elaborate a little on Anki in my next update, but it’s quickly becoming apparent that I’ll benefit from the endless repetition till the vocabulary and phrases begin to take residence in my head.

The ‘Learn Malayalam in Six Weeks’ book provides an encouraging introduction - stating how Malayalam is in fact easier in some ways than English. How? Well there’s a near direct correspondence in sounds to alphabet, making the language a little more predictable - as opposed to English for which we have 26 letters to produce the ~80 sounds of the language - which means it’ll be easier to spell and read Malayalam once you have the alphabet learnt. There’s also no concept of capital letters, cursive or differences in print to written like there is in English. All good news. Although the introduction then goes onto prevent us from getting to comfortable, and expresses that Malayalam more than has it’s share of hurdles to overcome.

I’ve tried to watch a little of a Malayalam movie (discovered through the Malayalam Movies subreddit), and the speed and apparent lack of seams between sentences, let alone words, leaves me with no hope of even beginning to get the gist of what’s being said. But I look forward to the magic of my brain beginning to make sense of the sounds, and form words from the stream of utterances. I’m aiming to write a little Malayalam in each of my posts from Day 5, time to get my head down!