Have told nearly everyone I come across of my plans to learn Malayalam - with many pulling the same expression that I remember seeing when telling people as a child that I have ambitions to grow up to be a robot. It’s Day 3 and I’m getting a few basic phrases under my belt such as:

Which is all pretty good fun and provides instant gratification, but having a party trick of knowing a few phrases in a foreign language, versus actually reaching any significant level in a language, soon has you accepting that there’s no getting away from the long and occasionally painful journey of learning the alphabet, the grammar, the pronunciation; none of which are immediately useful, but are the building blocks to gaining a command of language.

So I’m learning the alphabet, of which there is a varying number of letters according to various sources, but there’s certainly around 2-3x more characters than English - with the ‘name’ of the letter simply being how it’s pronounced - simplifying matters somewhat. Having so many characters, means there’s as many required for all the sounds of the language (unlike English) and thus for most part - a more predictable spelling for every word - where being limited to 26 characters in English means there’s an element of creativity in the pronunciation of words, and the lack of consistency results in the need to memorise how words are spelt - with it not being enough to simply know how it’s pronounced.

I mentioned Anki in my last post, which is a flash card reading app, with the added element of spaced repetition - the idea being that cards you have learnt reappear less frequently than the cards you are weaker in. It’s a free app for the desktop and Android phones, but is a paid app on the iPhone. It syncs you cards between devices - with one of my cards in my “Malayalam Vocab and Phrases” deck looking like this on the Mac edition of the app: 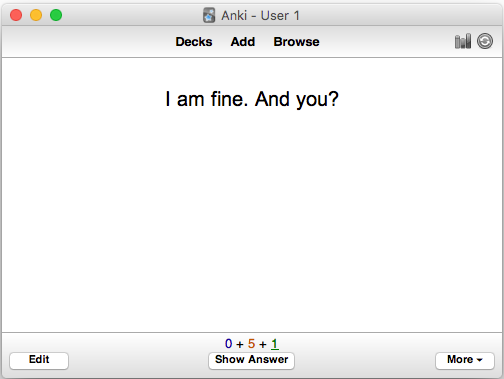 The cards themselves are those you create yourself, in this case I’ve created one which has ‘I am fine. And you?’ - which is then presented to me in my daily study session, and I’m expected to recall the answer, before clicking ‘Show answer’. Where I am then presented with the following: 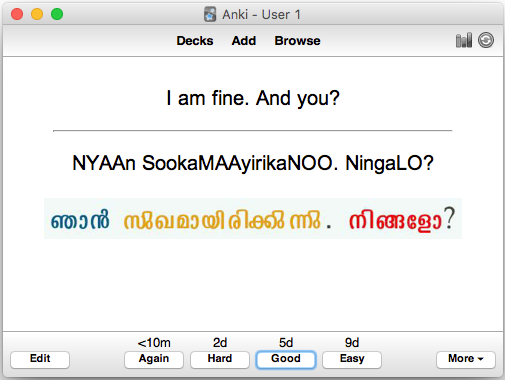 The spaced repetition aspect comes then in how I specify how difficult this particular card, or how easy it was for me to recall. My answer dictates how soon the card will reappear. Gradually you’ll have a phrase only appear once every few days, and then perhaps one every few months - by which points it’s hopefully made a home in a your permanent memory and settled down with a family. Notice in my example here, I’ve included the transliterated English, along with an image of the Malayalam spelling. One of my “Malayalam Alphabet” cards, looks as follows: 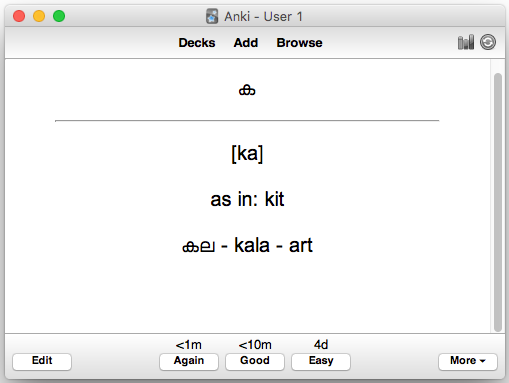 Where I’m including the pronunciation, followed by a close English approximation, and the word in action - in this case, the letter ‘ka’ being used in the word ‘kala’, meaning Art. For most popular languages at least, it’s possible to find pre-made Anki decks online, but as the book ‘Fluent Forever’ advocates, there’s huge benefit to making your own deck - where the process itself builds serves as practice, but it also means you choose examples, images etc that are most relevant to you and thus more likely to recall at a later stage. I only have about 25 cards in total do far, but aiming to add to this daily - and will be happy to share my Anki deck at a later stage. There’s also the ability to add audio to your cards, which’ll be excellent for getting that pronunciation nailed.

I’m planning to spend my morning commute using Anki, which should give me a decent 40 mins of learning each morning - with the evenings spent working through my linear textbook and Mango language course. I have no affiliation with Anki, and am sure you’ll be able to find other spaced repetition programs, but I figured I’d explain my process - due to having found the method efficient in the past when learning new English word definitions. Tis all for today, Pinneh Kamman!