I heard the rumours. I go a few days without an update and the streets start talking. They say I gave up. They say the flame fizzled out. They were wrong. All two of you who visited this blog over the weekend according to my Google Analytics statistics. I do this for you two.. the ongoing support from you both is appreciated.

Alright, so I had a busy weekend - but the study has continued. The Anki flashcards are growing - I currently have two decks: Malayalam Vocab, and Malayalam Alphabet - both of which are growing by about 4 cards a day on average. I’m finding Anki, the MangoLanguage course and the ‘Learn Malayalam in Six Weeks’ book complement each other nicely. Which brings me to a general point: if you’re learning a language, don’t go with a single resource. You want to be hit from all angles, hear the same concepts explained from different authors, benefit from the repetition, and have the blanks of one resources filled in by another. 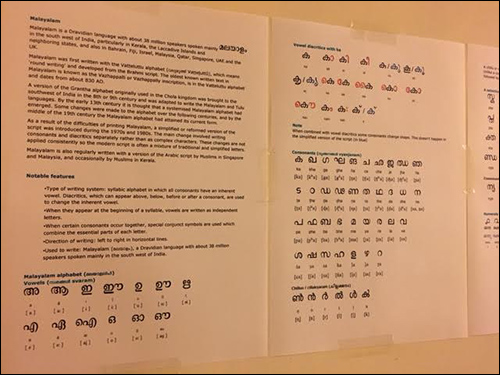 As the above photo shows, I’m currently living within an antique photorgraph. Ok, dodgy lighting aside - I’ve stuck the great Malayalam notes from Omniglot on my bedroom door, giving me something to look at as I stroll around while brushing my teeth.

A few steps into my Malayalam journey and one thing is becoming clear: it feels like a structured, intentional language. It’s well designed, with there being many patterns and high consistency - which has the abundance of characters and new rules to follow feel a little less daunting, reassuring even. It’s unapologetic in it’s complexity, and succinct too. I’ll be showing examples of this in the coming days.

I’ve got the majority of the consonants memorised, and the vowel diacritics down pat (what I had previously referred to as vowel modifiers) - moving the focus to the standalone vowels, and the combined consonants. I have the book ‘Farmer Duck’, and I’m starting to spot words, even managing to read many of the Malayalam words - despite having no idea what it actually translates too. So I feel I’m only a week or two away from being able to read - at least approximately, I’m fully aware distinguishing between the relatively subtle variations in pronunciation will take a lot longer.

I’m building a decent list of resources, and expect that I’ll very shortly be creating a ‘Malayalam Resources’ page on this blog to list the best of ‘em. Oh, and I’ve added Disqus to this blog so ya’ll can leave comments. Don’t be shy now.